Here’s what museums will look like when they reopen in L.A. - Sun Valley by Jose Mier 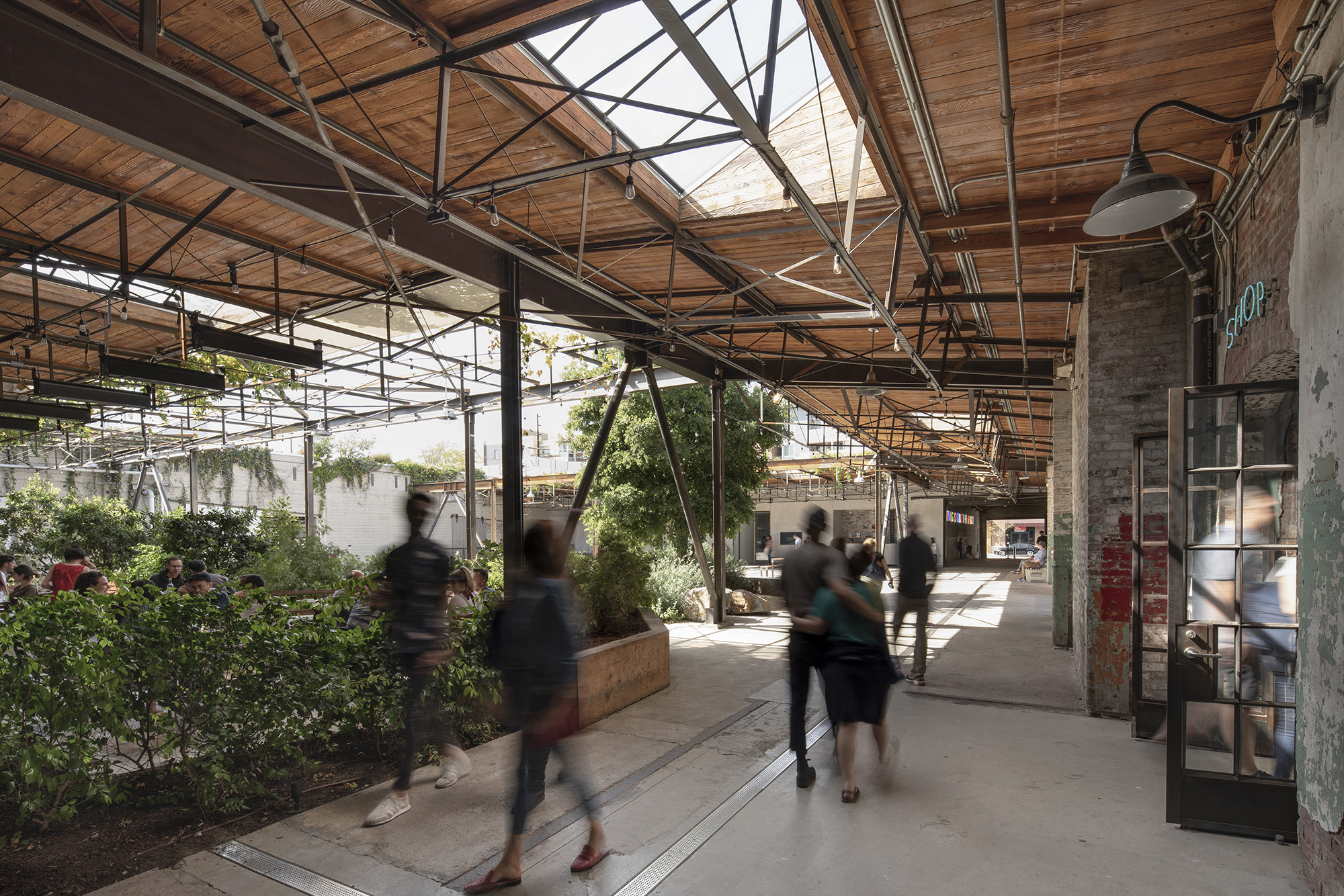 When Los Angeles began to close, it closed fast. Within a couple of days of California’s ban on large gatherings—but still nearly a week before L.A.’s “safer at home” order—almost every museum had shut its doors.

There were some initial holdouts, most notably the Broad: For a very brief period, the Downtown museum remained open but scrapped its standby line in favor of reservations only, and it axed access to Yayoi Kusama’s twinkling but tight Infinity Mirrored Room.

Months later, as L.A. museums have now been given the go-ahead to reopen with modifications on June 12, the Broad’s short-lived altered procedures have proved to be surprisingly prescient: Both state and county guidelines for museums encourage limited capacity, an emphasis on timed reservations, pre-purchased scannable tickets and the closure of interactive exhibitions.

But there are also plenty of recommended social distancing measures that we probably never would’ve imagined back in March: face coverings, temperature checks, one-way walkways, Plexiglass partitions, visitor logs and groups being limited to members of the same household. And unlike the all-at-once closures in the spring, most museums will not be reopening right away.

That doesn’t tell the whole story about how our in-gallery experience will change, though. We reached out to L.A.’s biggest museums in recent weeks to see what sort of modifications they’ve been considering. A couple never got back to us and many said they were simply too early on in the planning stages to have something to share yet. But some were able to provide candid insight into their thought processes about how visitor experiences will change.

Do you have a reservation?

If you’ve ever visited the Getty Villa on a weekend or scored advance reservations to the Broad, you’re probably already used to timed tickets. But prepare to see it a whole lot more: Every museum we spoke to said they’d consider timed reservations.

For some museums, it’s a simple pivot. Many area institutions already have experience hosting special exhibitions or intimate installations that require reserving specific windows of time. A spokesperson for the Skirball Cultural Center points out that its popular Noah’s Ark playground has always been a timed experience, so the museum already has a system in place that it can use for pacing visitors into the rest of its galleries.

At Arts District gallery Hauser & Wirth, it’ll be a much more noticeable shift. You’ve always been able to stroll through its breezeway and straight into the exhibition spaces—save for some popular opening weekends, when you might find a roped-off line outside of the galleries. But when it reopens on July 1, Hauser & Wirth will offer visits by appointment only.

Depending on demand, it’s easy to see a scenario where reservations could be tough to come by at certain venues. When the Huntington Library, Art Museum, and Botanical Gardens reopens its outdoor gardens on July 1, only 1,500 tickets will be available each day—about a third of its attendance numbers on its busiest spring afternoons. To account for that, the Huntington will now be open on Tuesdays, the one day a week that it had typically been closed, and will also offer select evening hours throughout July and August.

Controlling the flow of people doesn’t end with reservations. The Natural History Museum and the La Brea Tar Pits will both implement timed tickets to manage the number of visitors in its galleries and gardens when they reopen later this summer. But they’re also examining how our need to limit social groups to members of our own household might influence how we move about—so they’re planning pathways and spaces for families and adult guests across their indoor-outdoor areas.

Those sorts of logistical changes trickle down to exhibit design, too. The Skirball was set to host a traveling Star Trek exhibition at the end of April. But months of closure have meant time to think about how both that and other exhibitions will have to adapt to the new guidelines, including visual cues for six-foot distancing and one-way gallery flow, while still trying to capture the spirit of the show as originally planned.

Reopening could be gradual or all at once

Like that short period of an Infinity Mirror-less Broad in March, some museums will be faced with a choice to reopen sans some marquee assets as the county guidelines mandate that hands-on exhibits must stay closed. At the Skirball, that means hatching contingency plans around its interactive spaces and potentially reopening without its signature, family-friendly Noah’s Ark experience—a plausible scenario given that the county has specifically said playgrounds and climbing structures must remain closed.

But this is Southern California, after all, and for every museum space contained by four walls, there’s another that’s partially open to the outdoors, as is the case at Hauser & Wirth. “Our site in the Downtown Arts District holds several very different kinds of spaces—including our restaurant Manuela, a bookstore, a garden, and the open-air courtyard, as well as our four indoor public exhibition galleries,” says Hauser & Wirth partner Stacen Berg. “Because these spaces are all connected, we have to reopen them carefully and in gradual phases.”

That’s the approach the Huntington is taking, as well, though via slightly different means. When California okayed outdoor museums to reopen in mid-May, the San Marino estate started making plans to reopen its outdoor gardens only. And even with the county’s recent approval for indoor museums, the Huntington will still keep its art galleries, historical library and high-touch areas like the children’s garden closed for now, likely until the fall.

You may think that the Getty could’ve reopened its gardens under the outdoor museums guidelines, but it’s not quite that simple—nor the museum’s preference. “While the Getty Center and Getty Villa do have outdoor areas and gardens to be enjoyed, many must be accessed through indoor spaces; our collections are housed indoors,” says Lisa Lapin, vice president of communications for the J. Paul Getty Trust.

Similarly, a spokesperson for the Natural History Museum tells us its nature gardens are an integral part of their indoor-outdoor experience, and so it was their preference to hold off and reopen the entire museum at once.

There’s also another bleak reality: that some museums might never reopen at all, as is the case with the Annenberg Space for Photography, which will permanently close to allow the Annenberg Foundation to focus more on philanthropy.

What happens to exhibition schedules?

From an outsider’s perspective, it’s easy to look at museums and just assume they’ve been in stasis since mid-March. But just because we’ve lost all sense of time over the past few months doesn’t mean museums have, too.

There’ve been some signs of movement—physically in the case of LACMA, where a 26-foot-tall Yoshitomo Nara sculpture showed up on Wilshire Boulevard while we were all staying at home, even though its Nara retrospective, which was only weeks away from debuting before the shutdown, has yet to open. But more often those signs have come in the form of shifting exhibition timelines.

There were the delays, some with new timeframes already: The Hammer Museum, which was teaming up with the Huntington for the first time, was supposed to launch its Made in L.A. biennial in June but it’s been pushed back to early September. Plenty of other museums have delayed shows with no new date on the horizon. The Skirball was due to host a Star Trek exhibition late April, but it’s since been postponed. The Broad had an entire year of fifth anniversary exhibitions and events planned, and they’ve all been removed from the museum’s public schedule. And speaking of events: Nearly every museum has already called off in-person programming through the summer.

On the other hand, there’ve been some welcome extensions: The California African American Museum has decided to prolong its exhibitions into late August, including the Cross Colours survey that launched last fall. And Hauser & Wirth’s Lucio Fontana and August Sander shows will continue on when the gallery resumes visits, with plans already for a new collection of paintings from Ed Clark in August.

But there’s still so much more we don’t know. Back in March, the Geffen Contemporary at MOCA was already temporarily closed for exhibition installation, while MOCA Grand Avenue was heading into the final months of its Pattern and Decoration survey. Across institutions, what will happen to the many exhibitions that were due to open during the shutdown? Or the ones that were slated to close soon? Those answers, of course, vary from venue to venue, and possibly even from day to day; one museum we spoke to initially said it would be extending the run of its main exhibition, and a couple of weeks later let us know that it had closed.

There’s one detail we’re still mostly in the dark about: pricing. A spokesperson for the Natural History Museum told us they’ll be releasing reopening plans, including admission details and member benefits in early July, with an aim to be “as accessible as possible to our community.”

But early indications are that, even in museums where select areas will be shut down, we won’t see a drop in prices: Both the Aquarium of the Pacific and the Huntington, some of the earliest major institutions to announce detailed reopening plans, will both resume with full price tickets (though, to the Huntington’s credit, they’ll be upping their usual single monthly free day to two in July). But if there’s one silver lining: Many of L.A.’s major museums are free to begin with.