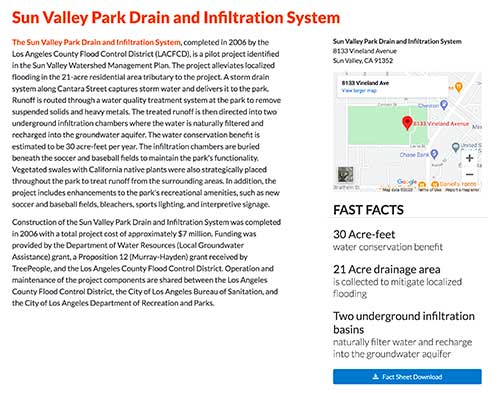 I’ve been doing a lot of writing recently about water conservation efforts in Sun Valley and about those scheduled for construction as well as those that have been completed. One of those complete projects would you may not even realize which is part of Sun Valley is the Sun Valley Park Drain and Infiltration System.

If you’ve ever had an opportunity to use Sun Valley Park which is located at 8133 Vineland Avenue, you may have taken  a stroll across the green grassy areas or your kids may have played soccer or baseball on the fields in this park. However, if you’re new to Sun Valley, more recently than 2006, you may not know about the drain and infiltration system which is located underneath the park.

As I’ve mentioned before Sun Valley is one of those areas greater Los Angeles that is prone to flooding and efforts have been made to reduce the flooding and at the same time collect, store or reuse the water from these floods. The Los Angeles County Flood Control District completed the drain and infiltration system in 2006. The drain system runs along Cantara Street and delivers the water to the park where it is filtered to remove solids and heavy metals. There are underground chambers beneath the ballfields which collect the water, which is then redirected into the aquifer.

It’s estimated that the amount of water it returns to the aquifer each year is 30 acre feet. That’s a lot of water. It’s water that would have either gone to waste or created hazards and difficulties for residents during periods of flooding. The fact that Sun Valley now has this relatively new drainage system can be a source of pride to our residents. And those who moved here since 2006 may not even know about it, but they’re reaping the benefits with decreased flooding and the fact that we are returning water to the aquifer which is especially important since California has been plagued by drought off and on for many years.

As you know I think Sun Valley California is an excellent place to live and work and the quality of life has been made even better by the addition of this drainage system. So the next time you go to Sun Valley Park, take a walk cross the ballfield and realize that you’re standing above the system which is making our area greener and contributing to a healthier environment.